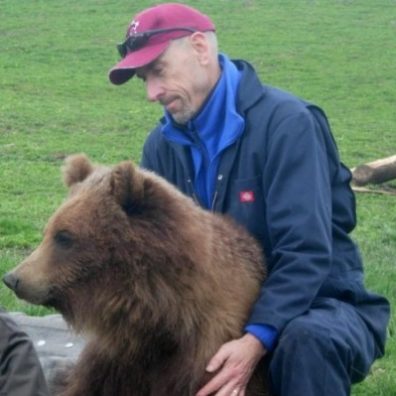 “They frighten me,” he said.

After working with moose, caribou and other hoofed animals, Robbins settled 16 years ago on grizzly bears. And because he did, Washington State University has become an invaluable resource for field researchers.

WSU’s Bear Research Center is the only place that keeps adult grizzlies purely for research. The nutritional studies done by Robbins and his students help guide the management of wild bears throughout their North American range – and sometimes on other continents.

The researchers “are some of the most productive people I’ve ever worked with in terms of good, credible science for conservation,” said Chris ! Servheen, grizzly recovery coordinator for the U.S. Fish and Wildlife Service.

Robbins “is recognized as one of the top wildlife nutritionists in the world,” said Chuck Schwartz, a U.S. Geological Survey biologist who leads bear research at Yellowstone National Park.

That reputation makes WSU’s center popular with students from across the country who are hoping for a career in wildlife research.

That reputation makes the center popular with students from across the county who are hoping for a career in wildlife research.

“If you come out of Charlie’s program, it’s a feather in your cap,” said Grant Hilderbrand. He studied under Robbins in the mid-1990s and now works for the U.S. Forest Service in Mississippi, managing red-cockaded woodpeckers and other endangered species.

Robbins, who was raised in Texas, came to WSU in 1974, for a one-year teaching job. He never left, and started the bear research center in 1986, when British Columbia! wildlife agents were looking for someone to take two cubs. Their moth er had died of natural causes.

Bo and Irv were scrawny things that arrived at WSU in plastic dog crates. One escaped the first day and ran wild through the university’s dairy herd. The cows scattered.

“Those are times when wildlife biologists can look pretty bad,” Robbins said.

Now, the center has 12 bears, all from Rocky Mountain states or provinces.

“They all have a story that says something went wrong in their lives,” Robbins said.

Sandy and Eliott’s mother taught them to raid bird feeders in Polebridge, Mont. She was shot and they came to Pullman.

Likewise, Patches was labeled a problem bear after visiting houses in Montana. When WSU vets took a look at her bad eye, they found numerous shotgun pellets embedded in her face.

Over the years, the bears have become a Pullman attraction. Parents bring their toddlers to watch them cool in a tub. Joggers sweat and watch from a popul! ar trail as Bo and Irv – now weighing about 700 pounds apiece – bluff each other to impress the females.

It’s a place for the town’s chamber of commerce to send visitors, “right along with Ferdinand’s (ice-cream parlor) and buying a sweatshirt at the campus book store,” said a receptionist.

Observant visitors notice a patch of missing fur from each grizzly’s back. Bad haircuts are one risk of being a research bear, along with needle pricks.

Typical of the center’s work is a study involving fish from Yellowstone National Park. Biologists are worried that non-native lake trout will wipe out the park’s cutthroat trout, which spawn in creeks where many fall prey to grizzlies. The bears can’t reach lake trout because they spawn in deep water.

Researchers turned to WSU to determine how much the bears rely on cutthroat. The key was knowing that both species of trout are high in mercury, due to geothermal vents in the bed of Yellowstone Lake.

Gr! aduate student Laura Felicetti is overseeing the study, in which 6,000 pounds of lake trout netted in the park were fed to the WSU bears in June and July – the same time Yellowstone bears were eating fish. Some of the captive bears had a fish-only diet; others got few fish.

Next, Felicetti will document the mercury content in each bear’s fur. Researchers in Yellowstone can do the same, and use Felicetti’s data to gauge exactly how much trout is eaten by each wild bear.

Felicetti is working on similar studies involving Yellowstone’s whitebark pine trees, which provide nuts for the bears and are threatened by disease. She’s also studying the dietary importance of berries.

Another student, Karyn Rode, spent the summer watching from tree stands and ridges, as grizzlies fished Alaska streams that are seldom visited by people.

In future summers, she’ll bring in fishermen and sightseers to document how the bears change their behavior. Her observations will help Alaska authorities decide whether to impose limits on such tou! rism.

“The bear-viewing industry is growing really rapidly” in Alaska, Rode said. “Basically, anyone with a float plane can take people out.”

But WSU research doesn’t always lead to restrictions. It helped preserve fishing at one popular Kenai Wildlife Refuge stream, said Schwartz, who worked for the Alaska Department of Fish and Game at the time.

Schwartz said Robbins and his students determined that – at least at that one salmon-choked stream – bears could get plenty to eat by fishing just at night. Schwartz told the refuge manager that he didn’t have to ban fishing, as was feared, as long as anglers left each evening.

Although they’re still abundant in Alaska, grizzly bears have been reduced to about 2 percent of their former range in the continental United States. Biologists estimate their numbers at somewhere between 800 and 1,200, down from an estimated 50,000 at the time of European settlement.

Robbins said the future for bears ! is uncertain.

“It’s hard to be too optimistic when you see the number of new housing developments going up in grizzly country,” he said. “It’s hard to get too pessimistic, or you couldn’t get up in the morning.”

3. A grizzly bear shakes off water in its makeshift bathtub while trying to cool off on a hot day at the WSU Bear Research Center. Photo by Kevin German/The Spokesman-Review3 Photos (2 Color)